HOW TO USE THE MATHEMATIC NEMI BLOCKS®?

Nemi blocks – what are they?

NEMI blocks is a teaching aid created by Nemezjusz Cywiński. It helps introduce children to the world of mathematics through multisensory experience. Their use in the teaching process is extremely simple, even when dealing with preschoolers who cannot yet write. Through their correct use, the children receive a pictorial representation of the individual numbers aimed at forming their mental representation. What’s more, the Nemi blocks can be touched and manipulated freely, providing a wider range of experiences.

Below are the instructional videos:

During classes, preschoolers made a sequence of numbers from numbers on magnetic cards. They did it in the form of a game, and then signed the numbers with Nemi blocks, combining the symbolic aspect with the cardinal one. In the next exercise, we arranged the numbers backwards from 10 to 0. We also managed to arrange some examples of rhythms only in this one lesson, such as 1,2,3,1,2,3, … or 1,2,1,2. , … It is worth encouraging children to create their own examples.

The writing of numbers in several ways is one of the foundational lessons in the Nemi system. These games are very attractive, both from the teacher’s and the student’s perspective. These exercises are already an introduction to learning addition. They teach in many dimensions, from subliminal addition to such abstract observations that each number can be written in so many ways … an infinite number of ways.

Counting, as a combination of two Nemi blocks, the children willingly arranged examples in groups. They signed the numbers arranged from blocks with magnetic cards, changing boards. Then the children, counting on the blocks, were to arrange the given number in advance, using 3 blocks.

We also checked in this episode whether work in kindergarten is better in desks or on the carpet? Please judge for yourself.

Creating board games using Nemi blocks. You will see how a universal tool can become Nemi mathematical blocks in your hands. We made a game by arranging blocks on a magnetic board.

In the next installment of the new games, children developed the ability to count up to 20. While working particularly in this way – the monograph seems to be a terribly artificial creation.

A great lesson with even and odd numbers. We put together a numerical matrix. Finally, we played an unusual card war.

The lesson is about comparing numbers. We compare the numbers in the cardinal and symbolic aspect at the same time. We are not limited to the range of 0-10 only.

Invitation for new series, which present how to teach math on Nemi Blocks

Workshops with NEMI in kindergarten

Workshops recorded during the pandemic. This is when our blocks found their way to your kindergartens. 100,000 preschoolers learn from blocks. It was the first instruction manual for our mathematical building blocks. The blocks in the MAC publishing house are not magnetic, but they are definitely better even in such a form than the flat filling of primer-type books.

A board game for adding

Anthill is a simple board game that helps you learn addition skills. Children can count on blocks when they are not yet ready to count by memory.

For all those who still have doubts as to what working on blocks at school will look like, I recommend watching this summary material.

A board game for multiplication

Snail is one of our favorite games. It allows children to relax during the game, forgetting that they are doing exercises that increase their multiplication skills.

More inspiration on our YT channel 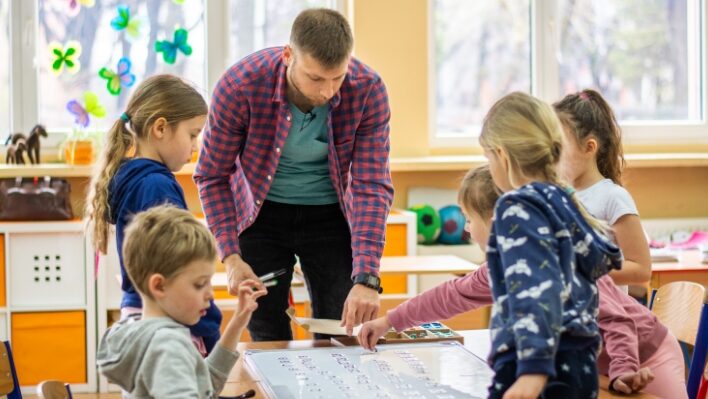